25/06/2019 Through online channels such as China's leading e-commerce of China Alibaba, Vietnam's pangasius products have appeared in many major cities in China. 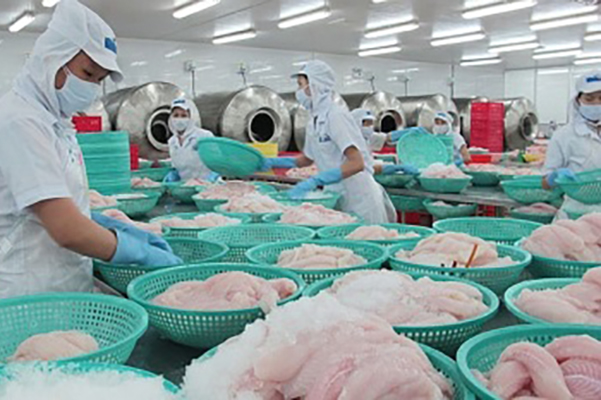 According to Mr. Truong Dinh Hoe, General Secretary of Vietnam Association of Seafood Exporters and Producers (VASEP), Vietnam previously exported whole pangasius to some provinces in the southern border of China, but now Pangasius fillet products were present in major cities such as Beijing, Shanghai and Dalian. Chinese demand will be even higher.

This decision creates a complicated scenario for Vietnamese exporters - at that time, it was unclear what tax the US would impose on Chinese tilapia export products.

Currently, domestic pangasius exporters are benefiting from the trade rift between US - China with big importers shifting to import Vietnamese pangasius products, this fish has been favored and accepted by American consumers.

In the past 10 years, China has emerged as a market specializing in importing seafood instead of specializing in exporting as before. According to VASEP, the Chinese market has a great opportunity but still has many potential risks because China is tightening inspection on food safety and non-quota trade.

China's seafood import demand has increased steadily every year with production of more than 3 million tons. Chinese consumers prefer foreign products and natural exploitation due to food safety concerns. In particular, they are willing to spend money to buy products that are accepted by the US and European markets. Typically, Vietnamese pangasius products have increased consumption in China since entering the US.

Vietnamese pangasius is difficult to conquer the US market. However, exporting to this market also helps businesses create trust and build relationships. In contrast, the Chinese market does not require certification and business is usually conducted via email but rarely conducted directly, Mr. Ich said.

China is rapidly catching up with the EU as the world's largest seafood importer, importing nearly 5 million tons of seafood in 2018, according to Rabobank. "Pangasius is a really good choice for Chinese customers who are looking for white fillet fish products" - Mr. Truong Dinh Hoe said.

One of the challenges to overcome is to create trust for Chinese customers to buy fillets instead of whole pangasius. According to World Bank data, China's GDP per capita increased from USD 3,471 in 2008 to USD 8,827 in 2017. Meanwhile, Vietnam's per capita GDP increased from USD 1,143 to 2,342. USD at the same time. This shows that Vietnam's labor costs are now much cheaper than China.

This means that Mekong Delta catfish enterprises are selling fish at a more competitive price to the Chinese market.

Currently, exporting seafood to China is increasingly convenient with low cost. Almost seafood export enterprises in the South have moved from road transport to sea. Compared with export through quota by road, main export by sea helps enterprises limit payment risks, product quality and save costs.

2019 will be an opportunity for enterprises to expand exports by sea to major cities of China to improve the quality and quantity of major export. Seafood exports to the Chinese market are forecast to reach 1.5 billion USD this year, of which pangasius is one of the key products.