25/06/2019 As of the first half of 5/2019, Pangasius export value to EU market reached 105.2 million USD, up 31.5% over the same period last year. In particular, the export to the four largest single markets is the Netherlands increased by 12.2%; England increased 59.4%; Germany increased 61.6% and Belgium increased 63.8% over the same period last year. So, starting from the beginning of 2019, pangasius export to EU has shown signs of clear growth after a long period of continuous decline. 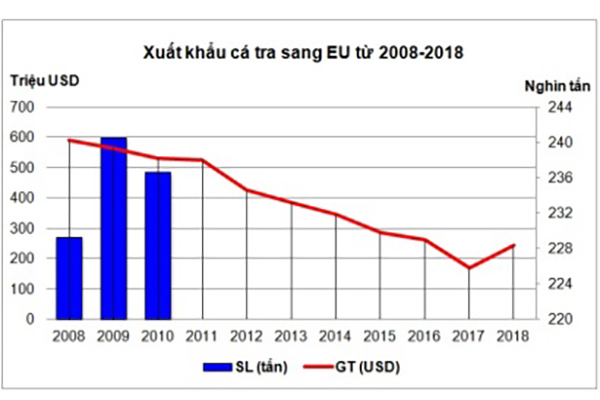 In the last 2 years, the value of pangasius export to the EU increased positively again because the import demand in many markets increased, the average price of imported Pangasius also increased from 2-2.6 USD / kg in 2016- 2017 raised 2.8 to 3.5 USD / kg in 2018 and in the first 3 months of this year, the average price of imported Pangasius of EU reached 2.93 - 3.55 USD / kg. Moreover, Pangasius export to Central and Eastern Europe is forecasted to increase in the coming time.

In addition, pangasius export to the UK also increased positively, in which, 2 groups of products are frozen pangasius (HS 030462 and HS 030272) are also being imported more in this market.

The average price of imported Pangasius of Austria, Denmark, Germany and Finland is also higher than regional countries.

So, the advantages that have been taking place in the EU in addition to the opportunities for tariffs after EVFTA comes into effect are forecasted to bring better growth of tra and basa in Vietnam. In addition to increasing high quality products, VAT, brand building and pangasius images in the EU, Vietnamese export enterprises also need to have specific strategies for each market.